In this article, let’s discuss some fabulous things to do in Junagadh, an undeservingly underrated city in the state of Gujarat.

Junagadh is not big on the tourist map compared to other destinations in the state of Gujarat, but the city does have a few tricks up its sleeves that make it worth visiting. To be completely transparent, my primary reason for visiting Junagadh was to see the architectural wonder of the Mahabat Maqbara. The beautiful structure stole my heart away the moment I saw its photos, and a strong desire to see it with my own eyes came as no surprise. However, apart from seeing the Mahabat Maqbara, I’ve discovered other fun things to do in Junagadh that you might find interesting, too.

~Junagadh is located at the foot of the temple-covered Girnar Hills, which makes it an important pilgrimage site.

~ With the population slightly over 300 thousand people, Junagadh is the 7th largest city in Gujarat.

~ The name of the city literally translates as “Old Fort”. According to an alternative version, it refers to the Greek rule over the region in 73-70 BC – literally translated, Yonagadh, the ancient form of the city’s name, means “The City of Yona” (the term “Yona” appears in Sanskrit literature to denote the first Greeks known in the East).

~ From the early reign of the Mauryan and Chudasama dynasties to the rule of Gujarat Sultanate, Maughal Empire and the British, followed by the accession to Pakistan and then to India, the history of Junagadh has been nothing short of eventful.

Things to do in Junagadh

My visit to Junagadh was brief but rewarding. The place captures the small-town buzz which is so different from the hustle and bustle of life in Mumbai, and I wish I culd stay there a bit longer. However, with a limited travel budget and countless obligations at home, my style of traveling dictates its terms. As usual, I managed to fill up my day with loads of things to make the most of my trip. So here are some of the fun things to do in Junagadh on a short visit:

Admire the architectural oddity of Mahabat Maqbara and Bahauddin Maqbara

Built in the end of the 19th century, the opulent mausoleums of Nawab Mahabat Khan II and his vazir Bahauddin are unlike any other monuments you’ve seen before. Both of them are extremely charming and it’s hard to decide which one boasts more imaginative features – the Mahabat Maqbara with myriads of domes that seem to bubble up into the sky, or the  Bahauddin Maqbara with graceful and alluring spiral staircases, wrapped around the four minarets.

Suggested read: 25 photos to make you want to see the Mahabat Maqbara with your own eyes

Make a trip to the Girnar Hill

Being a hardcore non-spiritual person, initially I didn’t include visiting the sacred Ginrar hill into my list of things to do in Junagadh. Ridden with temples from top to bottom, the mountain is an important destination for both the Hindu and Jain devotees. However,   as I climbed to the top of one of the Maqbara’s minarets, I saw enchanting silhouettes of the distant mountains, and it occurred to me that having a closer look wouldn’t be a bad idea. Located just a few kilometers away from the city, the Girnar Hill is easy to reach by an auto rickshaw. With pastoral and scenic views unfolding on the way, the ride was relaxing and enjoyable. It goes without saying that I was not going to climb to the uppermost point of the mountain – it would take the whole day to trudge up 10 thousand stone steps. But I did climb a bit, and ascending in the morning sunlight was a lovely experience.

On the way to the Girnar Hill, there is a humble building with whitewashed walls enclosing a large stone on which the emperor Ashoka inscribed his edicts back in 250 BC. The edicts are based on the Buddha’s teachings, but they also reflect the emperor’s ethics and philosophical conclusions.

Built in 319 BC by the king of the Mauryan dynasty, the fort has been besieged, abandoned, rediscovered, expanded and reconstructed many times over the course of upcoming centuries. Within its walls, you’ll find:

~ an abandoned mosque with  a terraced roof to enjoy the superb views over the city and mountains;

~ two of the earliest stepwells in India;

~ a giant cannon which was brought from Diu where it was left by the Turks after their defeat in the battle against the Portuguese.

You may also like: Adi Kadi Vav in Junagadh – one of India’s earliest stepwells

Walk through the galleries of the Darbar Hall Museum

It wouldn’t have been me if I didn’t visit at least one museum in a new city 🙂 The Darbar Hall Museum in Junagadh comprises a fine collection of the local Nawabs’ belongings  – armors and weaponry, furniture and palanquins, textiles and costumes, jewelry and silver items, carpets and chandeliers. The showy chandeliers were especially impressive, and they made me feel a bit nostalgic – when I was small, having an imposing chandelier in the living-room was a must in every respectable soviet home.

Where to eat in Junagadh

As I mentioned before, food is not one of my priorities when traveling, though of course sampling a local dish or two adds to the experience. Usually, my one-day journeys are so intense that visiting all the places I want to see leaves me hardly any time to indulge in local cuisines. However, in Junagadh I managed to finish in a timely manner, so I went for a Gujarati thali at the Geeta Lodge restaurant.

The place is located in a walking distance from the railway station, and their food was yummy. And yes, they serve that all-you-can-eat type of thalis when they keep offering you more as soon as you empty a plate, and that’s at no additional cost. So if you happen to visit Junagadh, I totally recommend it. Here are their Tripadvisor reviews – if you’re curious, just click on the image below: 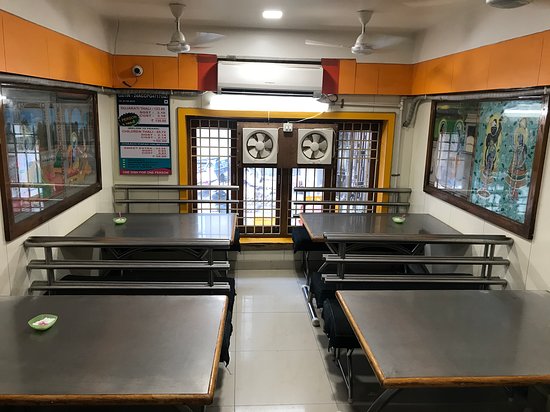 Geeta Lodge, Junagadh: See 116 unbiased reviews of Geeta Lodge, rated 4 of 5 on Tripadvisor and ranked #2 of 22 restaurants in Junagadh.

~ The closest airport in Jamnagar is around 140 km from Junagadh. However, it’s easily accessible by railway from other cities in India. Junagadh is 800 km from Mumbai, and it took me around 15 hours to reach there.

~ The best way to get around Junagadh is by an auto rickshaw, although local buses connect most of the city, too. It cost me Rs 400 (around $6) to get to all the above places.

~ November to February is the most pleasant time of the year to visit Junagadh.

Where to stay in Junagadh

To find best deals on hotels in Junagadh, enter your details into this search box:

Adi Kadi Vav in Junagadh – one of India’s earliest stepwells

Uparkot Fort in Junagadh, Gujarat – places to visit and things to see within its walls

Eating among the dead in Ahmedabad

The Royal Cenotaphs (Chhatris) of Bhuj

The Royal Cenotaphs (Chhatris) of Bhuj

Intricacies of the Prag Mahal in Bhuj, Gujarat