From the Jaswant Thada memorial in Jodhpur, also known as the Taj Mahal of Marwar, one can enjoy a  breathtaking view over the Umaid Bhavan Palace. Being strapped for time, I wasn’t sure I ‘d manage to make my way there, but there was something so majestic in the palace’s distant silhouette that I decided to rethink my itinerary in order to squeeze the Umaid Bhawan in. So, after having the time of my life in the Mandore Garden, studded with the most intricate chhatris, I headed for the intriguing palace. Needless to say, I kept my expectations high.

After visiting quite a number of palaces in India, I can sure say that the Umaid Bhawan gives a different feel compared to the majority of royal mansions. It’s definitely imposing, but not ostentatious. It doesn’t rub its grandeur in one’s face. With its solemn terracotta walls and monumental towers gathered around the huge central dome, this palace is extremely dignified, elegant and composed. If I had to describe the Umaid Bhawan in one word, this word would be ‘classy’. Everything is classy about this place  – from the manicured, spick and span lawns, to the beautiful interiors and perfectly designed courtyards. The architectural style of the edifice also makes the Umaid Bhawan stand out amongst the palaces throughout India – apart from the common amalgamation of the Indo-Saracenic and Classical Revival styles, the structure also features a great deal of Art Deco designs and patterns.

Interesting facts about the Umaid Bhawan

The palace is divided into three parts:

The first one functions as a museum, comprising a large collection of photographs, glasswork, porcelain ware, and clocks. There is also a lot of information about the construction of the palace, and what I liked the most is that they acknowledged the achievements of the architect, Sir Samuel Swinton Jacob, and engineer, Henry Vaughan Lanchester. It wasn’t like “Maharaja so and so built this palace in the year so and so”.

The second part is a luxury hotel managed by Taj Hotels, and not so long ago it got the award as the World’s best hotel at the Traveller’s Choice Award, organized by TripAdvisor. I can say nothing about this part of the palace as the entry is only for guests, due to the obvious reasons. But the girls from Tales of Travelling Sisters beautifully described their experience of staying in the Umaid Bhawan hotel in this post. If you’re curious about the prices, check out here: 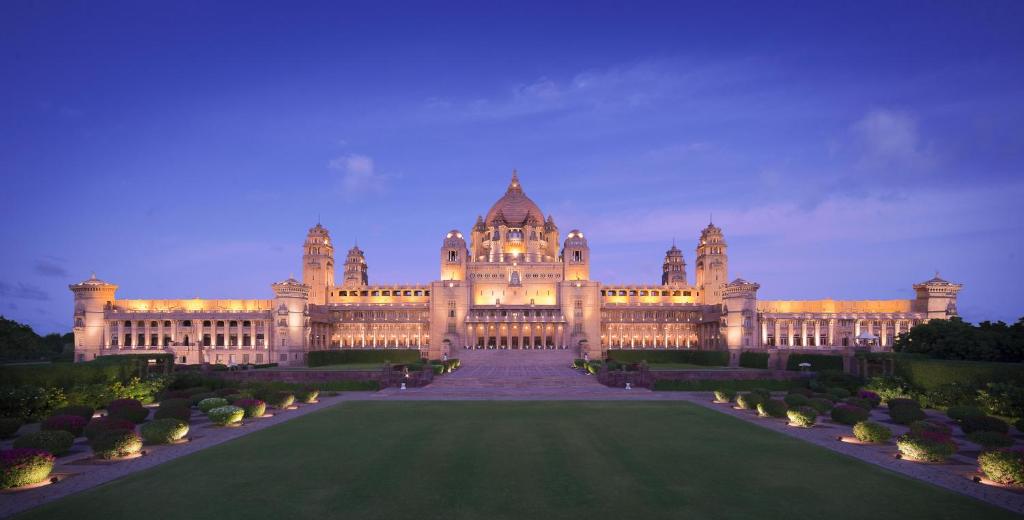 Built between 1928 and 1943, this grand yellow sandstone palace spreads over 26 acres of gardens, making it one of the largest private residences in the...

The third part is the residence of Gaj Singh, the current Maharaja of Jodhpur. The complex is spread across the area of twenty acres, and with 347 spacious rooms in the palace, the Umaid Bhawan is considered one of the largest private residences in the world.

The foundation stone was laid in 1929, during the king’s reign. The idea behind the construction of the palace was to provide employment to around three thousands of local farmers who struggled with a severe drought. The earnings helped them combat the famine conditions. It took around 14 years to finish the construction.

I reached there by an autorickshaw, it was fast and convenient. Make sure to haggle a bit, as rickshaw drivers in the touristy parts of Jodhpur are real sharks, from my personal experience 🙂 Bear in mind that the Umaid Bhawan Palace is located 7 km away from the city.

~ Best time to visit is from October to March. I visited in May, though. If you’re as crazy as me, please take a hat to protect your head, or perhaps even an umbrellar. Also, sunblocks and plenty of drinking water are a must.

~ It will take one to two hours to explore the place.

~ There are certified English and Hindi speaking guides offering there services in the museum.

~ The Umaid Bhawan Palace of Jodhpur on the map :

The Mandore Gardens near Jodhpur – a charming collection of royal memorials

Magical Hues of the Hawa Mahal, or The Palace of Winds in Questions and Answers

Top 10 Most Visited Places in India

The splendour of Ellora Caves

The Sun Temple in Modhera, Gujarat